Melee on Atramedes - Turning Down the Suck

Atramedes is a blind dragon in the Blackwing Lair raid instance. I've noticed that a lot of melee seem to have some difficulty with him - there's a lot of things he does that you need to avoid. You also will have what is called a sound bar during this fight. It, obviously, tracks how much sound you're acquiring. If you get 100 sound, Atramedes will know exactly where you are and brutally eat your face off, resulting in your death. This is not the desired outcome.

For most people, anyway.

The way my guild does this fight is we have all melee stack up on the left side of the room (as you walk in), and all ranged on the right. Usually we put 1-2 healers with the melee and the rest in the ranged group. Atramedes is tanked in the middle, head facing the door you walk in from. We have a hunter mid-direct pull onto our tank, then run back into the ranged group. 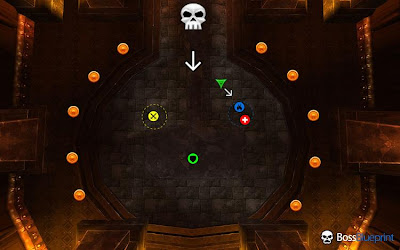 The most important part of this fight is tracking your sound bar.

It looks like that. The blue center will grow or shrink depending on how much sound you have. You MUST make sure that your sound bar is visible! If certain elements of your UI are blocking it, you need to move them.

The second most important part is avoiding anything you can that give extra sound. Some things are unavoidable, such as Modulation. Modulation looks like large rings, a bit like a sonar, and fills the entire room. As for things you CAN avoid:

Sonic Breath: "Cast at the highest sound player. Does 15,000 damage per second and adds 20 sound per second. Follows the player faster the higher their sound is." This happens on the ground phase. Depending on what boss mods you're using, you'll probably get a skull or x above you're head. At this point, you need to run away from your group - my guild has them run counter-clockwise, while everyone else takes a step or two in the opposite direction.

Anyone in either the melee or ranged groups can get this, so be ready to run.

(Yes, I'm dead here.) These are REALLY easily avoided. The easiest way to do it is to stand at maximum range then strafe to the left or right to avoid them. And his hit box is MASSIVE.

That far away I can still hit him with all my abilities and have fair warning when discs are going to come at me.

Air Phase: This phase only lasts 40 seconds, and for that full 40 seconds you want to be constantly moving around the outer parts of the room. Atramedes will be dropping fire on the ground, and more sound discs. The difference here is these sound discs don't move but they do have a sonar bomb that falls into them, and if you're standing in it you gain a whopping 30 sound. He'll also cast Roaring Flame Breath, which is a lot like Sonic Breath. It will target a player and follow them, leaving fire on the ground and speeding up. If you get targeted, you'll want to save any speed boosting abilities for when it really closes in. This breath will target the person with the highest sound going into the air phase, but once someone hits a gong it will then target that person. You shouldn't be hitting gongs unless assigned to it.

If you want to check out the entire boss fight, take a look at this video from Tankspot:

Posted by Bloody Gneisha at 1:15 PM

Newer Post Older Post Home
Subscribe to: Post Comments (Atom)
Unleashed Rage started as blog by an enhancement shaman for enhancement shamans and other melee types. It also had some posts about guild leadership and raiding.