A lot of stuff has been revealed by Blizzard these past few days. We've seen tier 13 sets, rogue legendary dagger lore, maps and new models for NPCs inside the 5-mans and Dragon Soul raid, etc etc etc. I personally follow MMO-Champion, but I know lots of WoW fansites and information sites are posting this stuff as fast as they can. We've got nice PTR videos and previews of some of the new mounts coming in 4.3. Obviously some people love the new mounts, dungeons, and gear sets, and some people hate it. That's fine.

What's not fine is every single video I watched previewing mounts and Void Storage had things like this in the comments:

"Blizzard's seriously﻿ run out of ideas when they're letting us have major lore characters as mounts. I just hope when they make Deathwing a purchasable mount from the Blizzard store, he at least can carry 2 people."

"Ya know Blizz this would have﻿ been cool two years ago."

Really guys? Really? I'm appalled. We're practically being showered with things we've asked for, and all you can do is bitch about how it's not good enough.

We wanted to be able to change the way our gear looked, we got Transmografication AND Void Storage to hold all our crap. "It's too expensive."

We wanted more mounts. "They're too plain, or they're reskins, or they're just not good enough."

Want want want bitch bitch bitch. There's a reason for you to hate everything and to blame the Blizzard employees for it.

The world we play in, the one we TAKE FOR GRANTED, that world is the carefully constructed child of hundreds, probably thousands, of artists, writers, 3D animators, musicians, composers, software engineers, producers, designers, and so many more. They work HARD on this stuff, and you look at it and say, "You didn't try. You're lazy. This isn't good enough." Do you even know what kind of work has to go into something as expansive as World of Warcraft? Can you fathom the kind of debates they must have when trying to please 11 MILLION players? The poor CMs on the forums and GMs in the game that must get screamed at by players who feel they've been wronged?

You know, I've never come across a GM in the game that brushed me off, or made me feel like I was wasting their time. Even when I had stupid questions, or made silly requests (GM hug!), they were endlessly patient, endlessly cheerful, and endlessly helpful. If they weren't sure on something, they let me know and apologized. How often must they get cussed out by players who are frustrated or having a bad day and expect a GM to pull out their God Mode and fix it for them? Heck, I'm embarrassed every time my DBM auto-responds because to me it sounds rude. But they don't care - I even had one /cheer at me because I defeated whatever boss I was working on. And that's awesome. Every GM I've talked to made ME feel important.

The GMs do what they are PAID to do - to provide excellent customer service. To make the customer feel important. I'm sure there are bad apples here and there, but I've never actually HEARD of a GM that was rude. There's plenty of people that will say they're useless, but I'm almost positive these are the people making insane demands.

I'm not saying I agree with everything Blizzard does. I hate the Firelands nerfs. I hate my tier 13 set. I think it's ugly as all hell and I'm insanely jealous of the other classes, especially mage, priest, and warlock. The clothy sets look amazing this tier. I hate rep grinds, and questing through Northrend, and how ugly tier 9 was and the stupid ToC arena raid, and the tiny amount of background draenei have, and gnomes. I really really hate gnomes. There's tons of random things about the game that irritate me. But there's so much that I love, and that's what I focus on.

They're trying to crank out so much content to keep all of their players happy, from the solo player, to the achievement whore, to the casual raider and the hardcore, there really is something for everyone. I mean, they even made it so you can see your equipped ilevel along with your overall ilevel! Those lazy bastards!

So instead of dwelling on everything you OMGHATE about this patch or this game, can't you get excited about the things you DO like? And if there's nothing you like, why are you still playing? Why do you even CARE?

Image of item level courtesy of Matticus, from World of Matticus, Plus Heal, Conquest of Nerzhul and other stuff that I don't keep track of. He is awesome, though.
Posted by Bloody Gneisha at 2:45 AM 3 comments:

Note: This is not a complete guide to the boss fight, if you'd like a real guide please visit Tankspot.com or other such sites. This is merely tips and tricks an enhancement shaman can use to help keep their raid alive and maximize total raid uptime.

The usual strategy is to have melee dps on Ignacious and ranged on Feludius. However, in my guild I usually dps Feludius because I have the best interrupt in the game. This reduces a lot of random outgoing damage from Feludius's Hydrolance, which helps keep people alive and save healer mana. Good awareness will help you here, as Feludius also casts Glaciate which will kill you if you don't run out. You'll need to keep a good eye on both bosses health and slow or stop dps accordingly. Also, don't forget about Aegis of Flame and the interrupt that needs to go out. Usually I don't switch to Ignacious unless my dps is really needed to burn down the shield, but my guild does 25 mans and 10 mans may be different.

For this phase, you'll want to dps Terrastra unless Arion is way ahead in health. Remember, when Terrastra has Hardened Skin, they'll absorb a lot of damage until the shield is broken, in which they'll take a big hit. If Terrastra is already a bit low and has the buff on him, slow or stop your dps and possibly work on Arion. If you can interrupt the Harden Skin cast, do it. It's a pretty quick cast so be ready for it. There's really nothing too special you can do here as an enhancement shaman. If you see your group is a little low or healers struggling, use a 5 stack of maelstrom on chain heal. Usually there's a lot of movement in this phase, so Healing Rain is not necessarily a good choice unless you have everyone stacking up.

During this phase you can help your healers out a lot. There's going to be a lot of damage going out, so as things progress start using maelstrom stacks on chain heal. Again, with all the movement Healing Rain isn't a good option. Another tip is to wait to blow Heroism until the Monstrosity is down to at least 20%. Blowing it right away is okay, but waiting that 5 or so percent really helps the healers. They're able to get more healing out with the haste buff when the damage gets a lot higher.

If you have any questions, leave a comment and I'll answer the best I can!
Posted by Bloody Gneisha at 8:41 PM No comments:

A friend of mine and his guild recently transferred off their (very) dead server of Drak'Tharon to Stormreaver. I rolled a death knight named Vindin over there and joined their guild as a friend. I'm slowly leveling, and as I don't have a main or anything over there, I'm starting with no gold and no BoAs. I hit level 60 fairly quickly, but didn't have nearly enough gold for a flying mount (only had 100g or so).

While running around handing in quests and selling grays, a level 70 pally opens trade with me twice. I think he's accidentally doing this, so I close it and continue emptying my bags. Then he spoke. 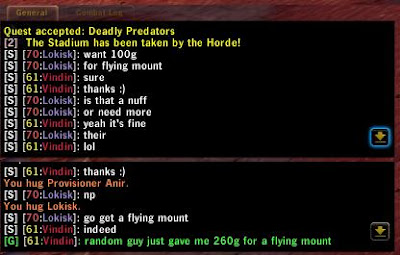 That was the most unexpected and coolest thing that a random person has ever done for me in WoW.

So thank you, Lokisk of Stormreaver US. You are awesomesauce. 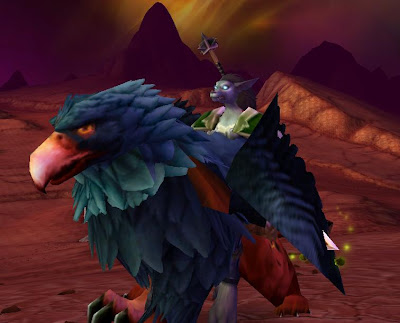 Email ThisBlogThis!Share to TwitterShare to FacebookShare to Pinterest
Labels: Random Acts of Kindness

Skills to Pay the Bills

This is a BlogAzeroth Shared Topic, posted by amaranth608 from Specced for Drama.

What is your favorite profession and why?

I'm going to have to say my favorite profession is a toss up between Alchemy and Herbalism. 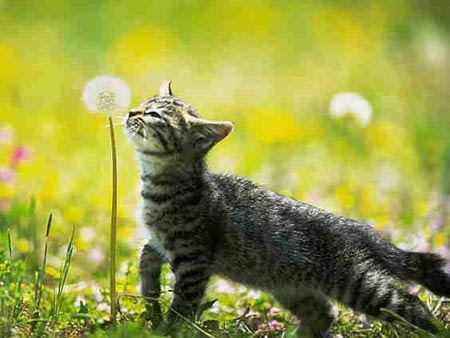 I find running around picking flowers to be soothing. I also get a little thrill taking a node from under a hordie's nose. I even picked up Herbalism on my druid so I could farm faster (she has 310% flying while the shaman only has 280% - plus flight form = overpowered)

Alchemy is great because I can make my own flasks, potions, and transmute meta gems and truegold for money. The extra stats and length of flasks is awesome, too. Flasks from our guild cauldron last three hours for me! Not to mention the Flask of Enhancement that I can pop in arenas or when I just feel like getting an edge in random heroics without popping a full blown flask.

Plus it gives me this mad scientist feel. I get the image of my shaman cackling to herself in a corner while glass vials clink against each other.

Hee.
Posted by Bloody Gneisha at 12:56 PM No comments:

Email ThisBlogThis!Share to TwitterShare to FacebookShare to Pinterest
Labels: BlogAzeroth

This is a very belated response to a Blog Azeroth Shared Topic, "What is your favorite weapon?" posted by Dangfool. I originally came across the topic on Fannon's blog, Dwarven Battle Medic.

I get very attached to gear rather easily. I love things that look epic, and replacing my epics with quest greens while leveling to 85 was a sad experience. I saved most of my level 80 gear, and sometimes run old stuff to get tier tokens and weapons so I can put them on and AFK in Stormwind and feel cool. (Even though I'm not.)

Generally, my soft spot is staffs. Any staff that just has a really awesome model I want to keep. My druid still has Origin of Nightmares from Naxx 25. 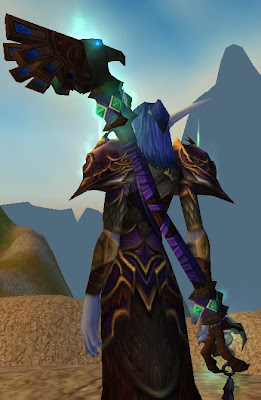 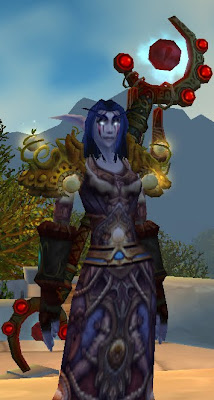 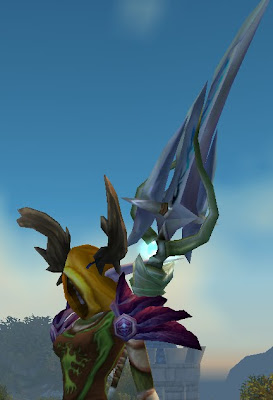 My shaman is carrying around Staff of the Plague Beast from Naxx 10. 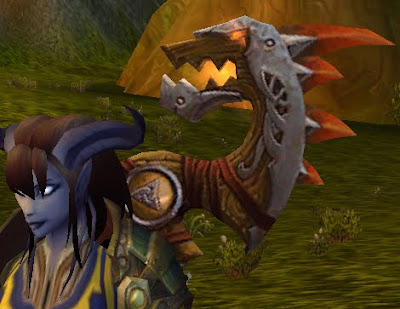 I also like weapons that match, such as Aegis of Damnation and Hammer of the Astral Plane. I find both of these to be incredibly ugly, but they match! And that is cool. 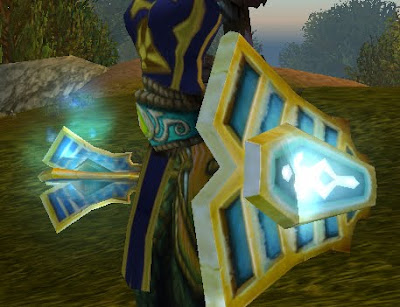 P.S. Yes, my druid is wearing gear to match the level of the weapon she's modeling in each picture. I'm that much of a nerd. And I kept/farmed up that much gear. Yes, her bags are pretty much full of random junk.
Posted by Bloody Gneisha at 2:39 PM 2 comments:

Email ThisBlogThis!Share to TwitterShare to FacebookShare to Pinterest
Labels: BlogAzeroth
Older Posts Home
Subscribe to: Posts (Atom)
Unleashed Rage started as blog by an enhancement shaman for enhancement shamans and other melee types. It also had some posts about guild leadership and raiding.